It’s been a long week, and I’ve decided to reward myself by focusing my next #BookReportSunday book review on my Dominique Does Life blog and podcast on my all time favorite book, “John Adams” by David McCullough, which, incidentally,  just so happens to have given birth to my favorite HBO miniseries of the same name, based on the McCullough biography. Below is my review of “John Adams.” Please feel free to let me know what you think about the book and the series below. 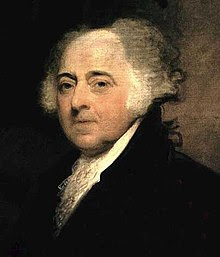 “I must study politics and war that my sons may have liberty to study mathematics and philosophy. My sons ought to study mathematics and philosophy, geography, natural history, naval architecture, navigation, commerce, and agriculture in order to give their children a right to study paintings, poetry, music, architecture, statuary, tapestry, and porcelain.”

If that quote doesn’t sum up the animus of John Adams, I can’t imagine what does, or what ever could.


An intimate portrait of possibly our most influential founding father, “John Adams” portrays the life of a dutiful, studious lawyer, a man of spiritual and educational excellence, a dedicated husband, a formidable debater and an effective, if unpopular (at the time) U.S. President.

John Adams, son of the well respected family of Adams—the Adams’ of Braintree [Massachusetts], to be exact—early settlers of the nation we now know as the United States, future member of both continental congresses, future president, and father to United States president John Quincy Adams, is first presented in this epic biography in large part when he successfully defends the British soldiers accused of igniting the Boston Massacre.


“You've got to marinate your head, in that time and culture.
You've got to become them."
(Speaking about researching, and reading, and immersing yourself in History) 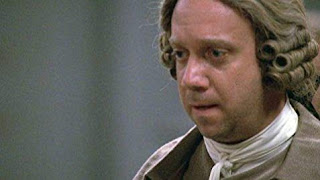 Adams, it soon becomes clear, is an expert orator, a cantankerous genius, a straight shooter and an ever-devoted and loving husband to wife Abigail and father to children Abigail “Nabby,” Susannah, John Quincy, Thomas and Charles. While John Adams is the main character in this eponymous biography, one might go so far as to say that Abigail is as much of a main character in this book, and in contemporary American History, as is Adams. 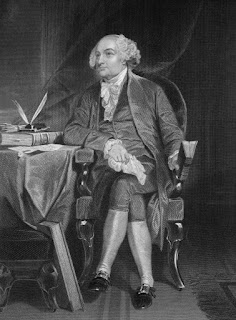 This book covers John Adams’ job as a lawyer, the American Revolution (though of course not as extensively as David McCullough’s “1776”), the continental congresses, Adams’ jobs as ambassador to several countries in Europe for the newly formed United States, Adams’ time as vice president, president and then father of yet another president of the United States of America in John Quincy Adams, through the lens of his friends, enemies, loved ones and other contemporaries, ending, obviously, with Jefferson’s and Adams’ deaths on July 4, 1826 (with a mention of Madison’s simultaneous passing).


“So, it was done, the break was made, in words at least: on July 2, 1776, in Philadelphia, the American colonies declared independence. If not all thirteen clocks had struck as one, twelve had, and with the other silent, the effect was the same.
It was John Adams, more than anyone, who had made it happen. Further, he seems to have understood more clearly than any what a momentous day it was and in the privacy of two long letters to Abigail, he poured out his feelings as did no one else:
The second day of July 1776 will be the most memorable epocha in the history of America. I am apt to believe that it will be celebrated by succeeding generations as the great anniversary festival. It ought to be commemorated as the Day of Deliverance by solemn acts of devotion to God Almighty. It ought to be solemnized with pomp and parade, with shows, games, sports, guns, bells, bonfires, and illuminations from one end of this continent to the other from this time forward forever more.”

If you enjoy this book, which I believe you will—I couldn’t put it down—I would also highly recommend checking out the HBO miniseries “John Adams,” which was based on this book, featuring career making performances by already beloved actors. Paul Giamatti and Laura Linney head the all-star cast of performers in this miniseries, which is produced by Tom Hanks and Brian Grazier, with David McCullough acting as consulting producer.

I can pretty much guarantee you that if you watch the miniseries based on this book, you will basically always see John Adams as Paul Giamatti—that’s how good the series is. I enjoyed seeing the companion HBO series very much, in addition to reading the book (about a million times), and I’d love to recommend that everyone who has the chance to do both does just that!


“The source of our suffering has been our timidity. We have been afraid to think....Let us dare to read, think, speak, write.“
—John Adams (“John Adams,” David McCullough)


In this book, you will find an intimate portrait not simply of a United States founding father and it’s first vice president and second president, but of a man caught up in a revolution, striving to make his world a better, more just, fair and kind place for all to live in. I award this book a hearty and enthusiastic five stars, both as a whole, and in all pertinent categories of review!


“ According to Adams, Jefferson proposed that he, Adams, do the writing [pf the Declaration of Independence], but that he declined, telling Jefferson he must do it.
Why?" Jefferson asked, as Adams would recount.
Reasons enough," Adams said.
What can be your reasons?"
Reason first: you are a Virginian and a Virginian ought to appear at the head of this business. Reason second: I am obnoxious, suspected and unpopular. You are very much otherwise. Reason third: You can write ten times better than I can.”


“John Adams” moves along at quite a clip, especially for such a hefty volume! I am always surprised all over again when, upon rereading it, I finish “John Adams” in just a day or two.

“John Adams” has the tense, import laden suspense of an action movie, the drama of a period piece, and the pace of a Hitchcock movie. It is an easy volume to read, and all of the situations and relationships which play out in this book, as well as the personalities of the characters are both perfectly historically accurate and eminently relatable. After reading “John Adams,” one can easily see why even the likes of King George III of England came to respect Mr. Adams, and, once you have finished with this book, you will too!

While you’re here, I’d also love for your to check out this fantastic piece on why “John Adams” was the precursor to “Hamilton,” and why both “John Adams” and “Hamilton” should be looked at as seminal biographical historical pieces.

Where The Crawdads Sing