Reviewing The Hateful 8
By: Dominique Miller

Boring movie which takes place mainly in one room and has little to no plot movement... 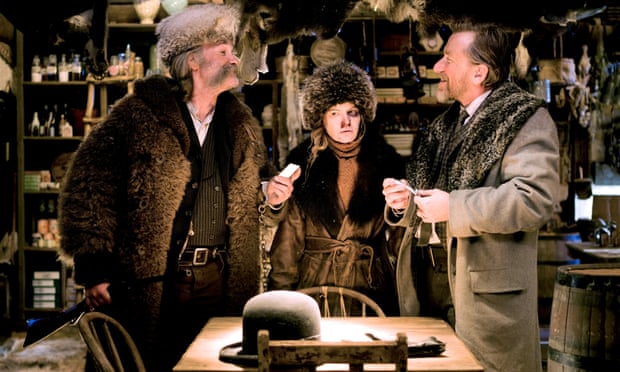 
My sick day movie today was The Hateful Eight. I've been meaning to watch and review this movie for some time now. But take heed, dear readers, because although I am a big Tarantino fan, I am about to be quite blasphemous. So far, this has been the only Tarantino movie that I do not like. It bored the shit out of me. Possibly literally.
The Hateful 8 has been possibly the most boring, pointless, predictable movie that ever manifested itself from the mind of such a genius filmmaker. The premise itself is ridiculous and not in the usual fun, somehow simultaneously deep and lighthearted way that the majority of past Tarantino movies have had. But this one is truly bad...eight people stuck in a house while a blizzard rages outside?? Really?? If anyone wanted to see someone lose their mind during a blizzard, they could've come up to Door County with me this past weekend and watched me go stir crazy in my condo while it snowed profusely outside. It probably would've been more entertaining and it certainly would've seemed a shorter affair than this three plus hour anchor drag of a movie.
The Hateful 8 utilized what would otherwise seem impressive 70mm cameras, being toted by equally impressive and talented camera men and women. It also, unfortunately in this case, utilized Tarantino's meandering story telling style, which is usually also...well...impressive, but which was unfortunately unswervingly dull in this particular instance. His normally engaging way of making sure that the engine and the caboose of a story connect somewhere in the middle fell messily apart every time this story time engine took even the slowest of curves on its long, long track. Though well known and loved, Tarantino's signature style was used in about the worst and most heavy handed way imaginable. Although tedious at times, the plentiful, heavy symbolism employed by so many Tarantino films was certainly appropriate because this movie truly was a never ending blizzard. How can such heavy, weather related symbolism be so drab, you ask? 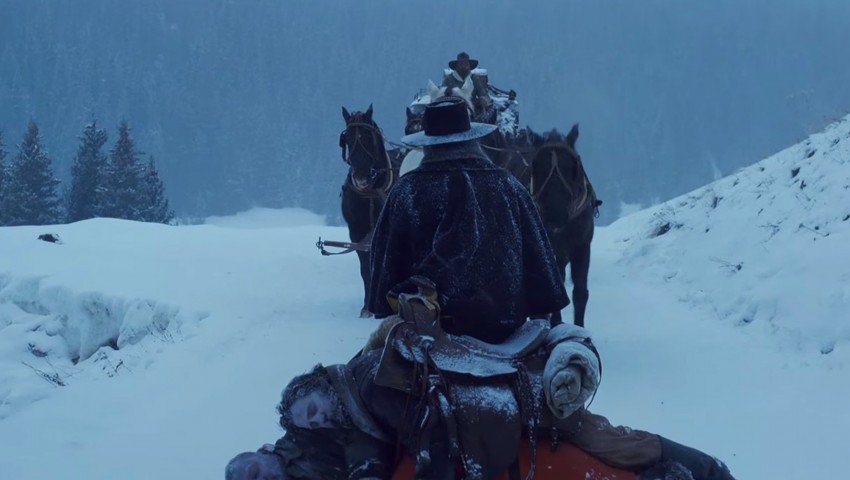 Let's explore. For starters, the very first instance of symbolism within this movie; that of a stagecoach winding its way-meandering-slowly, tediously through a mountain pass during a blizzard. Unlike similar imagery contained within the entertaining and poignant Django Unchained, this imagery is perfectly indicative of the lack of excitement to come in The Hateful 8.
Now, although this movie is quite boring, we can't attribute that entire state of affairs to the fact that it took place largely in one room. Resovoir Dogs also took place largely in one room and Resovoir Dogs was brilliant. Could it be that Tarantino was attempting to recreate some of this brilliance with The Hateful 8?
But I digress. Let's talk some more about the beautiful symbolism present throughout some of his greatest works. Inglorious Basterds and Django Unchained were deeply symbolic, deeply moving works in many ways. Inglorious Basterds was rife with symbolism and metaphor, both ugly and beautiful. The startling changes from one to the other keep the audience on the edges of our seats and glued to the screen throughout. The beauty of the milk lovingly poured from milking pail to glass at the LaPadite farmhouse suggests an innocence-an innocent time, an innocence of heart and mind of the hardworking people of Europe who had the misfortune of being invaded by the Third Reich.

The Importance Of Gender Neutral Bathrooms

I was recently visually accosted by this rather ignorant and unpleasant internet meme. Seeing that vicious little bit of fear-based reactionary nonsense made me decide to edit and publish this blog post which I've been writing for some time.

We've heard a lot lately in the debate about whether, where and when people of differing genders should be able to use the washroom.
There should be unisex and non-sexually-specific bathrooms available to everyone whenever and wherever the need may arise. Period. We need to stop looking at men as predators, women as victims, people who identify anywhere along the gender spectrum that differs from their sex as people to be avoided, people who are unwanted and lastly, of course, we shouldn't be looking at men and women as the only possible gender identities. This is juvenile, prudish and ridiculous. No one is suggesting that men and women will no longer have safe places to use the washroom. We're simply saying that everyone should have that option no matter what their gender identity. It strikes me that when this particular argument comes up, we seem to care so much about potential sexual harassment (especially of women), but rape culture is totally okay outside of this argument. Let's be honest here. We don't care about sexual harassment, because if we did, we would concern ourselves with trans individuals and individuals along the gender spectrum that will inevitably be sexually harassed for using assigned bathrooms that don't respect their identification. We simply don't want to have to lift a finger to change our way of life to fit those who we don't completely understand or identify with, a sentiment that I can only imagine must be echoed to the nth degree by those who don't fit our society's narrow standards of gender, because let's be honest, many of us don't. And it's our responsibility as conscientious citizens-as society as a whole-to change that.
Taking a good, hard, honest look within ourselves to understand and change any inborn prejudice is tough, but it's something we must do if we as citizens want to understand the world around us and the people in it, protect and maintain our rights and rise above divisive, sound byte culture infographics like these. I'm sure there will continue to be private, one room washrooms and even men's and women's rooms as well as gender non-specific restrooms. No one is suggesting that one group or another's rights should supercede one another. As one of my favorite radio talk show hosts says, "my rights end where yours begin."
And as Justice Oliver Wendell Holmes famously said, "the right to swing my fist ends where the other man's nose begins."

Laws like those passed and those being considered in the Carolinas are essentially a swing of the fist at the proverbial nose of the lgbtq and the differently abled communities, which account for a substantial amount of the population.

*A Chicago architect has designed public, gender neutral bathrooms with complete privacy in mind for those who need to use the restroom and do so in a timely manner, which sexually segregated bathrooms prohibit.


If anything, instituting appropriate bathroom access for all should help discourage sexual harassment and judgment. There are so many reasons why appropriate restroom access is so important. It's incredibly important for transgender individuals and those who identify somewhere on the gender spectrum that isn't exactly where someone else identifies. I believe, however that this issue extends beyond gender and sexual identity issues.
What about mothers who need to take their young sons into restrooms, fathers who need to take their young daughters to the restroom, parents who need to take their differently abled adult child or children who need to take their elderly parent to the restroom? There are so many reasons why we need to open up unisex and sexually non-specific restrooms. There are so many reasons why we need to stop legislating away our rights. But in order to do that, we will have to move past our prudish understanding of gender, sexuality and the human body at least to a very small degree.
Why not take a step in the right direction by doing away with bills like Indiana state senate bill 100, South Carolina's S 1203, North Carolina's HB2 and other such proposed legislation that would aim to take away the dignity of those who identify somewhere along the gender spectrum in some way that differs from their "assigned" sexual identity at birth and those who may need extra help using the restroom for physical and mental reasons. Restricting restroom access pending societal judgment of what gender or sex someone should or shouldn't identify with is hateful and unnecessary. Restricting restroom access to those with differing physical and mental needs is as well. Conversely, assuring everyone of every age and every level of physical and mental ability the right to use the restroom if and when they need, wherever they are, be it at school or out in public away from their home is an essential human right and should be treated as such.