Parades: The Weird Shit We Do In The Name Of Tradition

If you don't think this is weird, I don't want to know you


It's July. That means parades. So, let's talk about parades for a second...

Parades are a product of...you guessed it...white people. How do I know this? Because they're dumb. And unnecessary. And more than a little backward.

Thanks to a good 60% of my ancestors, these fucking things exist. Thanks, guys.

It's 1600 something. Folks are getting all ready to leave for the new world, where they're excited to be able to DO the discriminating this time, rather than being the object of it. Yay! This is clearly cause for celebration!

So there are all of these oppressed white people, waiting to get on the mayflower and shit (not to be confused with John Mayer's heretofore yet unpurchased mega yacht, "The Mayerflower," which I am absolutely positive will definitely be a thing). And as they all pack onto this rickety ass wooden shitshow of a boat, there are the town cryers and census takers (you know--as you do), and they're all standing there with their quills and parchment in their hands, recording who's going to the new world. So, as folks are boarding, they're asking them questions. They're all "so, what are you planning on doing once you get there?" And they're like "aside from probably murdering the natives and displacing those who don't die, I don't know...maybe like celebrating our unique culture and shit?

Honestly, we really haven't thought that far ahead." And the census takers and town cryers are all "cool, cool. So how are you planning on doing all that?" And this gets them thinking. They're like dude, I don't know. How ARE we planning on doing all that?" That's when some genius pipes up, "I know! We will march through the streets, lighting things on fire and throwing away food. That'll surely invoke a sense of vigorous patriotism. Obvs."

The town cryers are all: "so, basically you're staging a demonstration...like a war, really, but with candy? And kids engaging in mortal combat for tootsie rolls, which there will never be enough of?"

And the pilgrims are all "basically."

And it is at that point when everybody stops trying to get those lousy religious whackadoos to stick around. After hearing all of that, the Europeans are like "yep, that'll do it. Sayonara, bitches! Have fun with that whole "new world" situation. Sounds like a blast! Be sure to send us postcards and make sure to post on Insta, so we can all congregate merrily, down at the pub, tuning in each week to the next chapter of your New World adventure. I'm not gonna lie--there'll probably be a teensy bit of schadenfreude on our end, because while we're nice and comfy over at the pub, with roofs over our heads and fireplaces to keep us warm, you're over there trying to live off the land and being slaughtered by the natives for pulling that whole "blanket prank" y'all were talking about doing when you got there. Yo, that might not translate too well, but make sure to live stream it when you do."

And the pilgrims be like "cool, yeah. We will. Hashtag 'men going their own way.' Hashtag 'oh no they didn't hashtag oh, yes they did.'"

And the town cryers and census takers pat their comrades on the back and shake their heads in bemusement as they board their wooden ship with no bathrooms and ready themselves for a year-long poop cruise. And, once the Mayflower hits the open sea, the pilgrims all start to look around and notice these little sheets of paper taped to each other's backs. Now, I'm no historian, so I can't say for sure what each and every single sign said or, for that matter, who wrote it, but I imagine that at least some of those signs intoned warm wishes, such as "you're all going to die" and "fuck off over the horizon, assholes."

So, that's my historical outline of the humble beginnings of the American parade.

Let me tell you.

Parades are a place where all the neighborhood cops who are not currently engaged in rounding up black people go. I'm serious. There are more cops at parades than you're likely to see at your local craft doughnut and artisinal racism shop.

Parades are a place for inappropriate levels of patriotism (see white pride for further reading).

Parades are a place where it's okay to say: America: "love it or leave it," while ejecting copious amounts of burnt diesel from the dual exhausts on your F-350 truck.

Parades are a place where parents are allowed to express themselves without fear of judgment. For example, at parades, it's totally okay to physically assault other individuals for their choice lawn chair spot.

Parades are fun for kids, as well.

Parades are a place where kids can gleefully engage in a level of mortal combat heretofore unimagined, for the right to the ownership of that prized tootsie roll or laffy taffy, only to be brutalized by an overzealous adult, carrying an overly full pillowcase of kid's candy. Is this person actually collecting candy FOR kids, or has the parade based fervor led them to become totally unhinged? Alas, we may never know.

Parades are a place where corporate entities definitely ARE people, my friend. You can expect to see businesses rolling through the streets of your hometown, with overly done floats that advertise their latest products and/or services. Because freedom of speech. Amirite? Because nothing says patriotism like people tryna sell you shit you don't want or need. 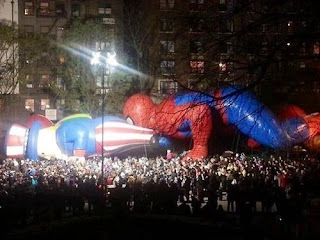 Parades are also a place where politicians can be themselves. And by that, I mean that politicians and aspiring politicians can fulfill their life's dream of spraying their bald spots with shoe polish and being carried through the streets of your town, USA in mid-life crisis cars for the express purpose of having everyone gaze fondly at them as they wave, like they're Caesar of Rome or something. You guys, we literally had a president die doing this. It's tough work. Politicians are everyday heroes. TOUGH. WORK.

And as this all plays out, we get to listen to the local high school's un-ironic marching jazz band. Of course, because it's a jazz band, you can expect to see them improvising their own parade routes while they attempt to play a Charlie Parker cover that you absolutely WILL NOT RECOGNIZE!

And then, you get to sweat outside, while waiting for the parade to end. We Americans are patriotic fuckers, so this could take hours.

I woke up one Sunday morning, when I first moved into my new apartment, thinking I was in a war zone, convinced that The Purge was happening right outside my French doors...but no such luck. It was a parade.

Parades are great for veterans, dogs, and folks with PTSD too. It allows them to freely commit to being themselves, by which I mean, that they are free to dissolve into puddles of anxiety, as the patriotic Americans outside their house re-enact a war, complete with drums and explosives, fit to leave dogs, veterans and the mentally unstable alike tinkling in the wrong place. But, patriotism...

Parades tell us who to vote for, what to buy, and how to absolutely never act. Parades are a uniquely American tradition that jam up the streets and leave our trains so full that actual commuters cannot board them...Parades are as American as baseball, apple pie, and coming to a new world, in order to escape persecution AND remove the natives.

Some might question how watching adults and children fight it out for that disgusting tootsie roll the local mayor's corvette just ran over, while simultaneously reducing dogs, veterans and the mentally ill to a quivering, collective mess is patriotic, but you know what we say to that?

at July 04, 2019
Email ThisBlogThis!Share to TwitterShare to FacebookShare to Pinterest